Who joined the campaign?

The campaign was a call for action to unite everyone who cares for people with cognitive impairment. The Commission sought the commitment of hospital Chief Executives and listed hospitals who signed up to the campaign on the website. The website also enabled individuals to commit to the campaign. Individual commitment certificates listed simple, straight-forward steps tailored to the person’s role.

The most important first step for everyone is to learn about delirium, dementia and other forms of cognitive impairment. Key organisations also joined as supporters to promote the importance of the campaign and are listed on the supporters page. This was an opportunity to share success stories and helpful tips to address the challenges faced in implementing change. If your organisation would like to contribute please share your story here.

Everyone has access to resources, webinars and regular newsletters. By joining the campaign, hospitals were able to get a head start on meeting the cognitive impairment items included in the NSQHS Standards (second edition) released in 2017. Assessment to the NSQHS Standards (second edition) commenced in January 2019. Many hospitals already have initiatives in place to improve the recognition and care of people with cognitive impairment. This campaign did not replace or duplicate local action. Rather, it built on existing programs and projects to provide a platform for collaboration and sharing of good practice – read stories.

Additional work of the Commission includes: 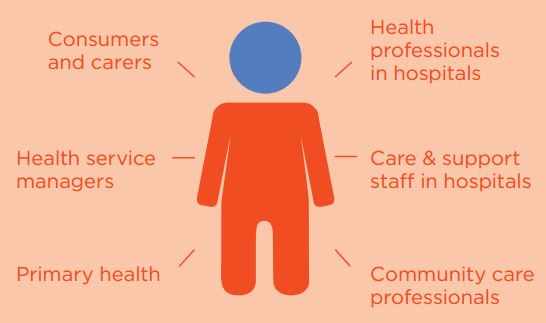 Find out how
individuals can
make a difference